The University Chapel/Center of Ethics in the CAR

A dream that became a reality!

Dr Hibaile ministry at the University of Bangui has brought Professor Gustave Bobossi, Rector of the University in 2008 to request to him to help built a Chapel at the University campus where he can minister to the soul of the students and university staff and professors. Friends of CIDEL and many other brothers and sisters in Christ who have seen the amazing things that God is doing through the life and ministry of Dr Hibaile have provided the funding that has helped to finish the building in 2015. The dedication of the building was done by the Prime Minister who was sent by the President of country to represent him at the ceremony.  The current President and his Prime Minister both have been in CIDEL’s and Pointman Leadership Institute’s seminars three times when they were leading the University. During the dedication, the President has accepted the request of CIDEL and has given honorary medals to some people as recognition of their support to the ministry of CIDEL.

Now the Center of Ethics is active with more than 300 students who have applied for 13 weeks of leadership training in small groups on the book of Dr Tim Elmore called the Habitudes: images that form the leadership attitude and habitude. In January 25th, the Center has hosted Mrs Christine Lagarde, General Director of International Monetary Fund who visited the Central African Republic and has chosen to meet with the students of the Economic Department of the University in CIDEL’s Center of Ethics. The chapel is now opened to various leaders including Government officials, students who want to get some training we offer.

CIDEL has a great challenge with his staff that has only two full time workers for 11 years now. Only for the ministry at the University, we need at least 6 people for the population of 20,000 students. With our activities with the Government institutions, the churches and other organizations, CIDEL is praying for hire a minimum of 4 new staff this year if God provide for those new employees. Having new workers will unload Dr Hibaile’s responsibilities he is carrying since the creation of CIDEL in 2005. A nonstop ministry for more than 10 years can push in a burn out syndrome that could be a disaster. We appreciate your prayers and financial support to meet the growing need of CIDEL in the Central African Republic and Cameroon.

Editor's note: CIDEL would like to place a number of benches (see photo) around the chapel to provide a place for students to sit and gather during their break time. Each bench costs approximately $100. If you would like to contribute toward this need, please send your check to Grace Church at Willow Valley with the note "For Chapel bench project."

The pressing need for the chapel ministry right now is to raise funds to adequately equip the faclity to be used for maximum impact on the campus of Banqui University. Just how great an impact will CIDEL be able to have through the chapel ministry? Consider the words of Professor Gustave Bobossi, the former Rector of the University, given at a recent dedication of the building:

"This building is God's work that is realized for the good of humankind. A man is valuable for the society if he is spiritually equipped. I understand that to be a Rector of a university he has to go through all the steps, but without the spiritual I can not pass a value to the next generation. I was surprised when I was appointed Rector. The first difficulty I faced in the university world was  the lack of spirituality among the university leaders. I decided to lay my mandate under the power of God that's why I asked Hibaile and two other Pastors representing the Grace Brethren Churches to support me until the end of my mandate. Having a chapel within the university is to allow God to come among us to bring the solution to the pain in the country. My prayer is that CIDEL will have more courage to motivate the students. The chapel is a tool to prepare young leaders for the best of the nation. May God keep CIDEL in its vision for the best of the CAR."

If you or others you know are led to make a contribution to equip the chapel, it should be sent to Encompass World Partners, PO Box 3298, Monument, CO 80132-3290.  It should be designated:  Account 7110, CAR Ethics Center Furnishings (Augustin Hibaile).

The construction of the building is finished. We need to landscape the outside of the compound, and finish the outside toilet.

The only concern we have now is to have equipments inside the building and begin to use it. Please share that need with the friends of CIDEL to see if some can help again with a Christmas gift for the chapel equipments (chairs, tables, etc,).

Here are some recent photos of the progress that is being made in the construction of the chapel on the grounds of the Universtiy of Bangui! Please continue to pray for the work to be completed in a timely fashion!  Please pray specifically for Martin Bayani, a CIDEL member who is supervising the construction. Yesterday his motorbike was stolen near the chapel while he was away. 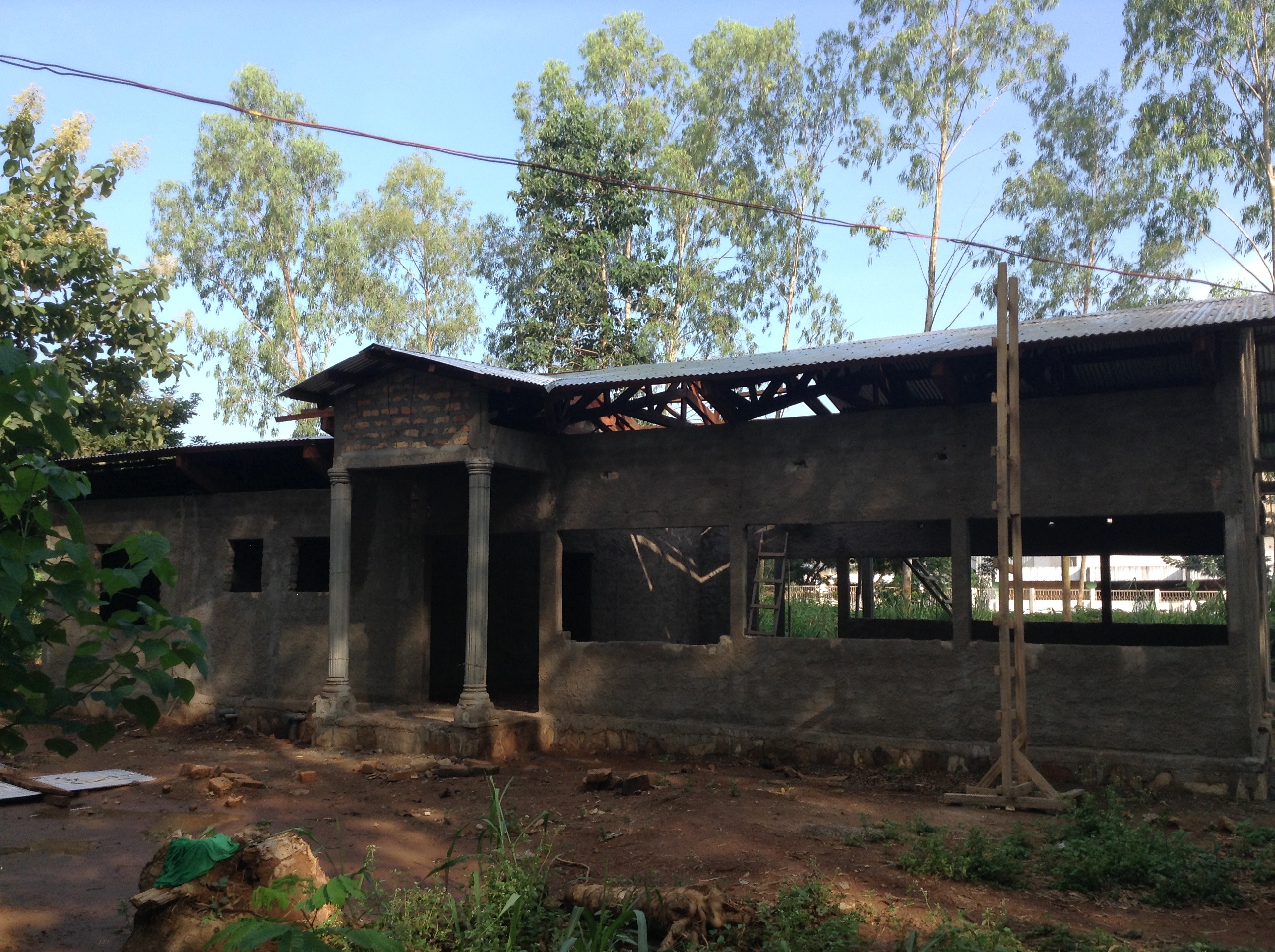 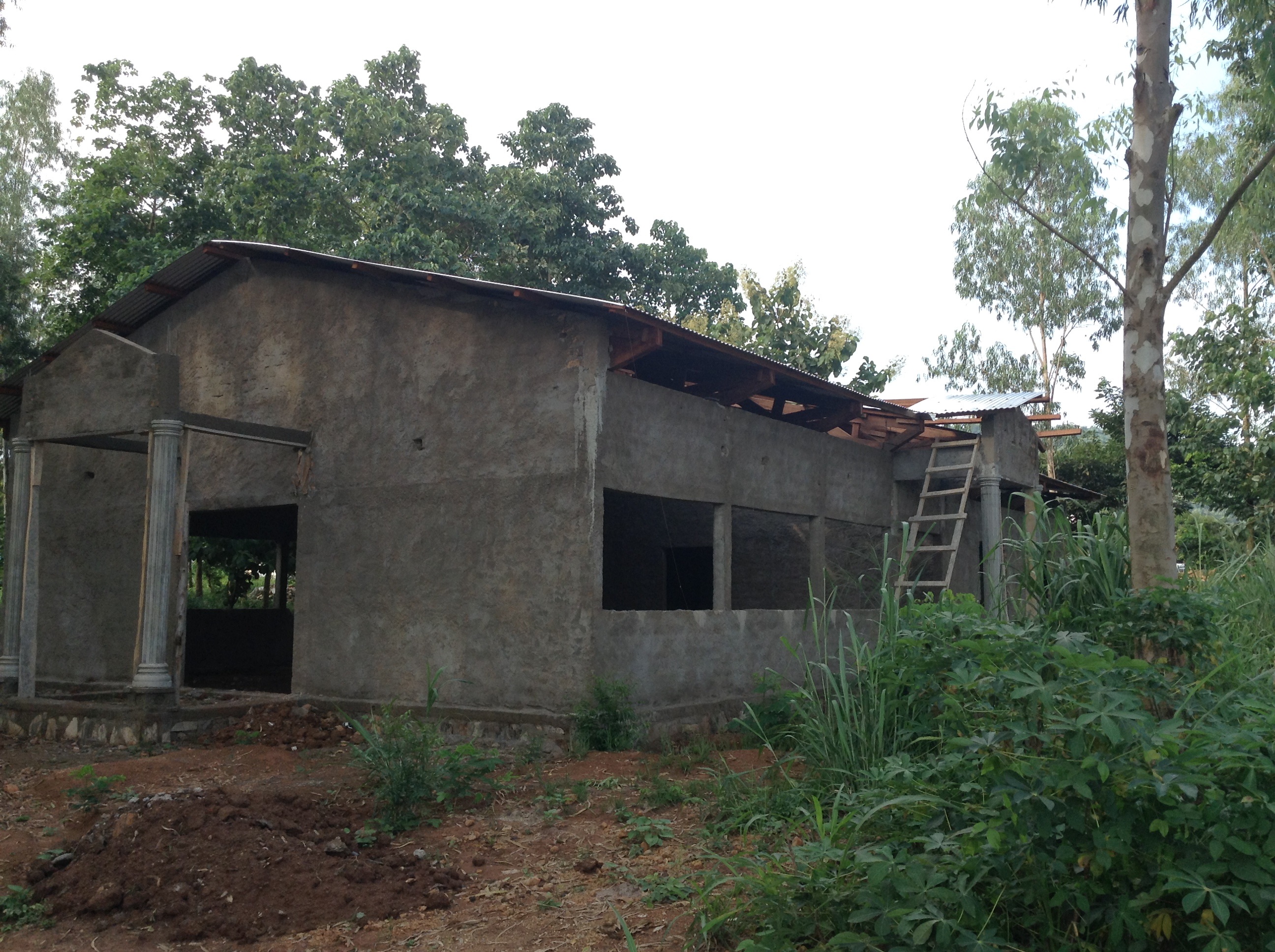 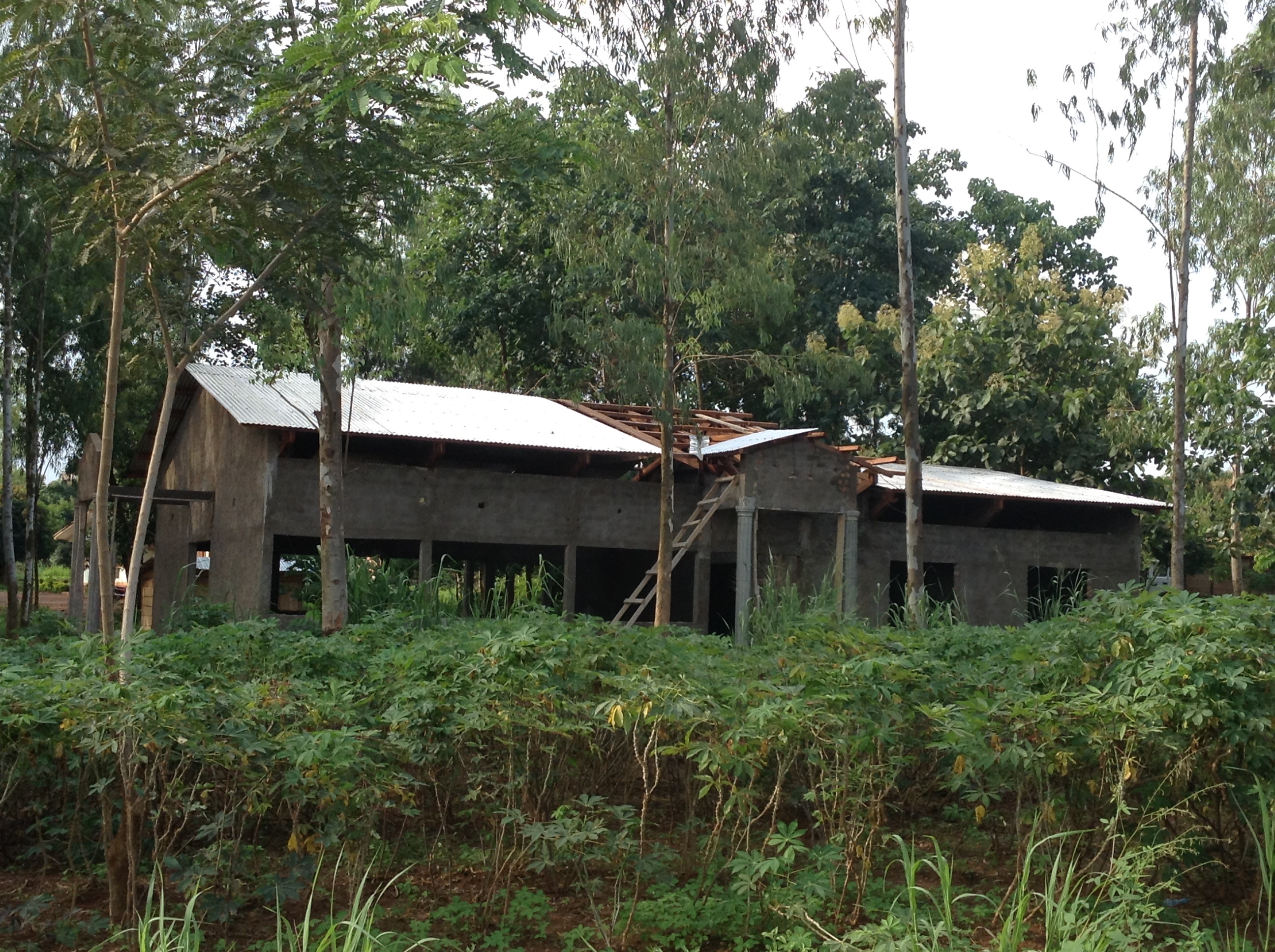 As you can see from the photo ... construction is moving ahead! Praise God! Please continue to pray for the completion of this vital project! 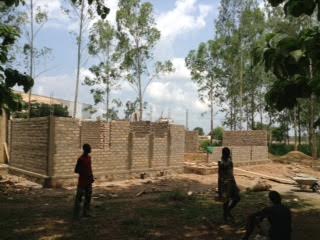 We have prayed since 2008 to respond to the request of the Rector of the university to provide a chapel at the campus for a ministry for the students. God has answered our prayers and the construction began three weeks now. Continue to pray that the building will be completed in a timely manner and that God would overcome any obstacles that may arise.

See photo below of construction site 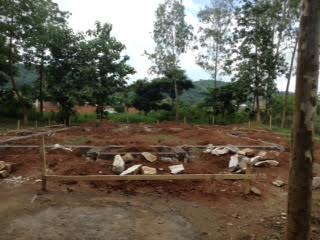 We just signed a paper of agreement between the university and CIDEL this morning to start the building construction of the chapel/center of Ethics at the university campus.

Please continue to pray that the building will raise up in the months ahead.

Together we can train a generation to transform a nation. See attached pictures of the event 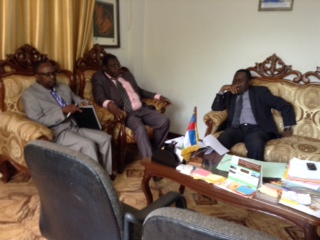 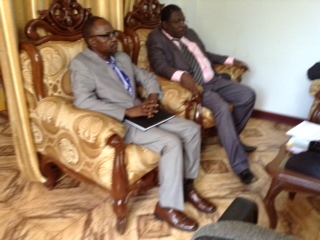 A Special Word of Thanks from Dr. Augustine Hibaile (December 1, 2012)

Dear beloved in Christ,
I am thrilled by the expression of your generosity toward my ministry with CIDEL in the heart of Africa.
Since 2008 that God gave me the opportunity to minister to the leaders of the University of Bangui as well as the students,
I was asked by the former Rector of the University to help build a Center of Ethics that will serve as a chapel for the spiritual development of the student body and the staff. The Rector said: " As I am appointed to my new job as the Rector of the University, its apprears to me that there is a spiritual darkness in the midst of the University. Nothing than the word of God will free people from sin and all deviation from faith in God." That the reason he wanted CIDEL to be involved in that project and be willing to begin a chaplaincy ministry within the University.
I was informed about you gifts sent to help build that new center. We will promote Christian Ethics, leadership, prevent corruption and minister to people one by one for a real transformation in their lives and their character and behaviour. As soon as the money will be transfered to us, we will begin the building construction and will let you aware of how the project will go. There are great opportunities ahead among people at the University of Bangui so I ask you to pray for me and for CIDEL so that we will meet the need.
Thank you all for being sensitive to the need among students who are the leaders of tomorrow. I am teaching two classes of students of the third year in the Department of Economics on Ethics and leadership. All of them are very eager to learn those new subjects. I got their encouraging feedback from some students who said that my teaching gives them an inner compass for their future. Praise God and pray for more impact.
More later.

Vision for the Center of Ethics/Chapel

In partnership with a team from Intervarsity, CIDEL has in the past organized workshops on ethics and micro enterprise for the students and staff of the University of Bangui. The university has asked CIDEL to introduce these two subjects into its curriculum.

The Chapel will house a campus chaplaincy ministry which is vitally needed at the university. Approximately 16,000 students are studying at the University. Seventy percent come from a Christian background. The Christian campus ministry does not have a place to meet as classroom space on the campus is severely limited. Cults and religions are also targeting the students at the university, making the work of a campus ministry even more important. Consider the following statistic about the problems young Christians face at the university: Statistically, 75% of young people from Christian homes who enrol at the university stop attending church within 4 years. If any army was to lose three quarters of its forces it would not be considered a defeat – but a disaster!

There is a desperate need to invest spiritually at the University. Dr. Hibaile’s vision is to have a full time, committed servant of the Lord on campus to serve the students. He would utilze the chapel facility as his base of operations. Dr. Hibaile is confident that having a chapel at the University will give him and CIDEL an opportunity to train a godly future generation of leaders who in turn will have positive impact on the society of the Central African Republic. 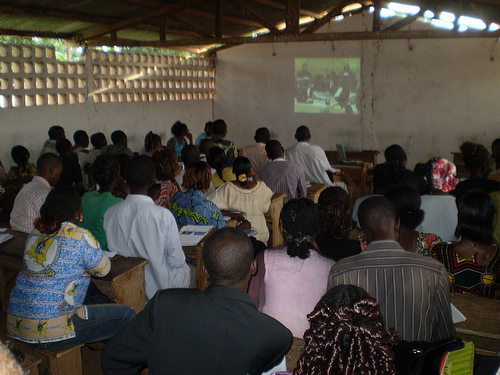 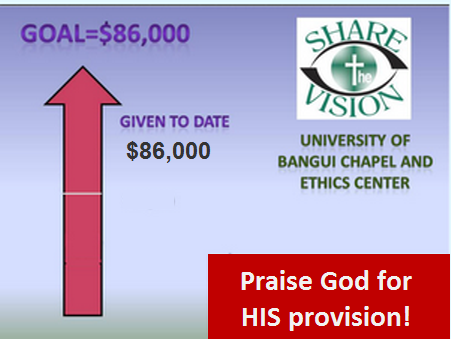 Students in class at the University of Bangui

Praise God! Through the generoisty of many friends of CIDEL, the needed funds to construct the Chapel/Ethics Center have been received! Thanks to one and all who gave toward this vitally strategic project! Updates on the progress will be posted as received from Bangui. So stop back soon! Please continue to pray as the Chapel/Ethics Center Project now enters this new phase.

Currently, $45,000 has been received toward the construction of the chapel. In addition, two "matching gifts" of $10,000 have also been committed. If you would like to make a contribution toward the matching of these gifts (and NO gift is too small!), please contact either John F. Smith ([email protected]) or Tom Julien ([email protected]). Thanks in advance for your prayer and financial support for this strategic project!

From a recent email from Dr. Hibaile that stresses the need NOW to begin this vital project!

“The Rector is still in prayer for the building of the chapel/center of ethics. The construction of the department of the Arabic language has already started at the university campus. It's will be a building of four floors.  The Rector of the university is facing strikes from the students and professors. On Saturday he stayed at home just to spend time in reading the Bible and pray. He invited me to join him so I did spent 4 hours with him to encourage him. The Rector of the University is doing all he can to maintain a Christian influence on the campus, but he needs help."   - Dr. Augustin Hibaile